Jeff Mack’s Mr. Monkey is back for another adventure! This time the great outdoors beckons, or rather, it coerces him into a rather reluctant trek to recover his stolen video game controller.

Mr. Monkey just wants to win his video game. Over and over again he runs, ducks, climbs, swings, jumps, and then falls. He just can’t win! In a fit of anger, Mr. Monkey puts down his game controller and shakes his fists at the TV screen. But wait, what’s this? When a little bird swoops in and snaps up Mr. Monkey’s controller, everyone is in for an adventure! Mr. Monkey chases the bird through town and into the woods, mimicking his video game as he runs, ducks, climbs, swings, jumps, and, inevitably, falls, shaking his fist at his feathered foe. Yet even in the midst of his frustration, Mr. Monkey takes a moment to appreciate the natural world before sprinting off after the bird once more.

The comic format functions as an effective introduction to a panel layout, and font choices help differentiate primary text from dialog. The main text is displayed in serif font, while the characters express their emotions through sans serif font within word bubbles. The book even introduces comic-style sound effects with the occasional “SMACK” and “BOING!”.

The repetition of the text works on multiple levels. First and foremost, the simple sentences and oft-repeated chunks of text provide emerging readers ample opportunity to build confidence. Yet the repetition also echoes Mr. Monkey’s persistence; he may shake his fist in anger when he falls, but he gets up and tries again. And again. And again. The situation and scenery vary enough that the repeated text never approaches tediousness.


This books is a strong contender for kid appeal. The humor of Mr. Monkey’s outdoor adventure strikes just the right chord of slapstick paired with subtle wit. Mr. Monkey chases a bird, goes over a waterfall, smacks into a moose’s backside, and bounces from a trampoline to a storefront awning to make it home—what’s not to like?!

The text also lends itself well to multiple readings. As readers grow more confident with the text, they will find plenty to pore over within the images, including a fender bender between a cyclist and a carrot car, a turtle carrying a hamburger on its back, and a cow driving on the wrong side of the road.

Many readers will be able to connect with Mr. Monkey’s obvious and mounting frustration as his attempts fail—first he cannot win his video game, then he cannot get his controller back, and finally it seems doubtful he will even get home in one piece. GRR! But he tries and tries again, and his persistence pays off. He recovers the controller and arrives home, albeit a little worse for the wear and far too tired to make another attempt at winning his video game. Perhaps he’ll be ready to try again tomorrow, after an extra-large dose of fresh air and an extended tech break; as long as he can find his controller...

One Year, One Series, Two (or more!) Books

Over the past few years, as we here at Guessing Geisel have considered which books to put on our mock ballot, I find myself pondering the same question: What happens when two+ books in the same series are published in the same contender year?

Multiple series titles being published in the same year happens quite a lot when it comes to titles specifically created in the beginning reader format. Sometimes all the titles have the same publication date; in other cases some titles are published in the spring and others in the fall (or something along those lines). My guess (and please comment if you have further insight) is that for many kids the beginning reader window is very brief. So if a reader loves a series, they won’t necessarily want to want another year for a new title because by then they are probably further along in their reading journey.

For the real Geisel Award Committee, this means that it’s very likely they’ll be considering at least a few titles in the same series. Although I can’t speak to any specifics from when I served on the committee, I can say that there were such titles that year. When we look at the list of past winner and honor titles a clear pattern emerges. If two or more books in one series are published in a year, only one title is selected as a winner or an honor.

Fox the Tiger* and Fox is Late 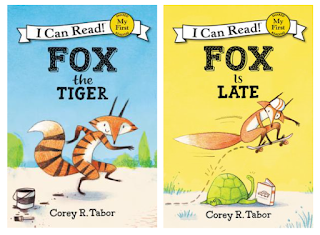 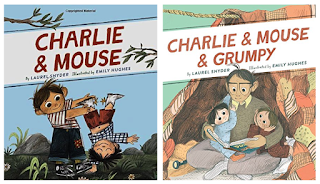 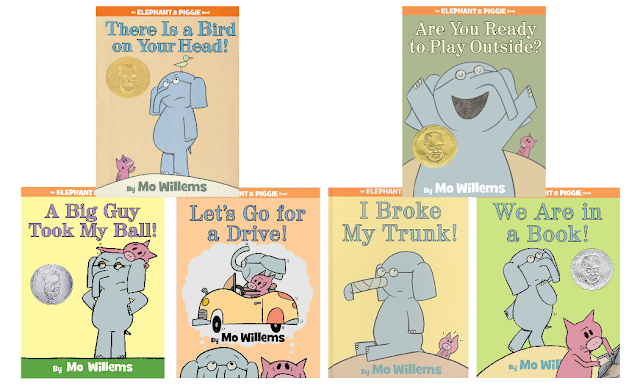 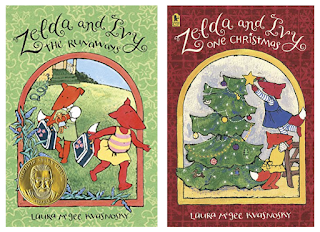 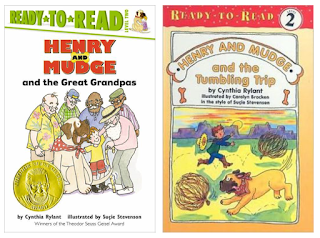 Which makes me wonder, how would the unrecognized series title(s) have fared if they had come out a year earlier or a year later? Would Charlie & Mouse & Grumpy have walked away with a medal or honor if it wasn’t competing against the first title in the series? How about Fox is Late? Or the other King & Kayla titles published in 2017? Obviously, it’s all speculation. We can’t know what the real committees discussed, and the landscape of Geisel contenders varies from year to year. Still, I can’t help but wonder...
Posted by Amy Seto Forrester at 9:00 AM No comments:

Today I'm excited to bring you an interview with our newest co-host, Kahla Gubanich. While Amanda is taking time off from blogging to focus on the birth of her own beginning reader, we're happy to have Kahla's wit and editor's eye to help us out. Kahla and I worked together for several years (we coordinated mock award discussions together, among other things), and I'm thrilled to have the chance to do so again, even if we're still thousands of miles apart. Without further ado, let's get to know Kahla!

What's your current position and what's your favorite part of the job?
As it happens, I'm transitioning! I currently manage my library's makerspace in Carroll County, Maryland. The makerspace is designed to help kids of all ages develop STEAM skills through hands-on experiences. My favorite part of the work is seeing young customers learning entirely new skills; and they often reach a point where they can turn around and explain or teach those skills to someone else. It's so rewarding to watch someone go from feeling intimidated and overwhelmed by something to feeling confident and proud of their hard work and persistence. Very soon, though, I'll be moving to a position as Children's Services Supervisor in neighboring Frederick County, and I'm so excited to face the new challenges that will come with the change!

What are you most excited about as a new co-host for Guessing Geisel?
I'm really looking forward to engaging in the conversation around beginning readers with all of the blog's contributors and readers! The old stereotype is that librarians enter the field because we love to read; but I think it's more accurate to say we love to talk about books. And what better place is there to talk about beginning readers than Guessing Geisel?!

How many years have you been guest blogging for Guessing Geisel?
This will be my fourth year (check out Kahla's past posts), and I'm super excited for another season of high-quality books and thoughtful reviews from my colleagues around the country.

What do you love about the Geisel Award?
I love that the Geisel is open to so many different formats and genres; the award really embraces the idea that a child can learn to read (and learn to love to read) with any book! That said, I'm crossing my fingers for some more nonfiction titles to work their way into the winner and honor slots in the coming years...


What's your beginning reader pet peeve?
I tend to get annoyed by sentences that span a page turn. Especially for readers who are truly just learning, it can be challenging to hold the thread of a sentence across multiple pages. It also makes it more difficult for readers to sound out the full sentence and then repeat it again for comprehension.

What's your all time favorite beginning reader or Geisel winner/honor?
I Want My Hat Back (2012) gets me every time; I always love a bit of woodland drama and resulting carnivorous behavior. But I also have a soft spot in my heart for You Are (Not) Small (2015) for its almost magical ability to convey so much childhood truth with so few words. And the final page always makes me chuckle. But then again, the humor and imaginative play in Fox the Tiger (2019) is completely delightful. Oh, I'm sorry, you asked for just one favorite...?!
When you're not librarian-ing, what do you like to do?
Old hobbies include knitting, drawing, hiking, camping, and frequently losing my mind over the general cuteness and hilarity of ducks. Newer hobbies include hammocking, archery, and occasionally pretending to be a tiger.

Posted by Amy Seto Forrester at 9:00 AM No comments:

“The Theodor Seuss Geisel Award recognizes the author(s) and illustrator(s) of a book for beginning readers who, through their literary and artistic achievements, demonstrate creativity and imagination to engage children in reading.”

Welcome back for the fourth year of Guessing Geisel! (Can you believe we're starting our fourth season already?) Guessing Geisel was created to expand understanding of the Geisel award criteria, provide assistance to those planning Mock Geisels across the country, and celebrate good books for beginning readers. We have a lineup of great contenders to celebrate, relevant topics to discuss, and insights into the committee experience to share with all of you. We're thrilled to hear from many guest bloggers from previous years, as well as adding some new voices to the conversation -- including a new co-host (more about that in our next post)! Watch for the first contender post coming soon, and let us know in the comments what titles you're excited about this year.

And the fine print:
Guessing Geisel is in no way affiliated with nor reflective of the views of this year’s Real Committee for the Theodor Seuss Geisel Award, whose selections will be announced at the ALA Midwinter Meeting Youth Media Awards. Opinions stated here do not reflect the attitudes or opinions of ALSC, SLJ, Booklist, or any other institutions with which the authors are affiliated. All thoughts on eligibility or the strength of a contender are entirely speculation.
Posted by Misti at 9:09 AM No comments:

Amy Seto Forrester
is a Children's Librarian at the Denver Public Library, Denver, Colorado. She earned her MLS from Texas Woman’s University. An active ALSC member, Amy is currently serving on the Nomination and Leadership Development Committee. Her ALSC committee work includes serving on the 2016 Geisel Award Committee. She reviews for School Library Journal, the Horn Book Guide, and Kirkus.
Amanda Foulk is the K-12 Specialist at Sacramento Public Library, Sacramento, California. She had the pleasure of serving as chair of the 2016 Theodor Seuss Geisel Award Committee. She has been an avid lurker (and occasional commenter) on fellow mock award blogs.
Misti Tidman
is the Collection Development Librarian for Youth Materials at the Mansfield/Richland County (Ohio) Public Library. She earned her MSLS at the University of Kentucky. As a member of ALSC, she's had the pleasure of previously serving on the Program Coordinating Committee, as well as the 2016 Geisel Award Committee. She also reviews for School Library Journal, and blogs at kidlitgeek.blogspot.com.
Kahla Gubanich
is the Children's Services Supervisor at the Brunswick Branch of Frederick County (Maryland) Public Library. She earned her MSLIS/MA in Children's Literature from Simmons College in Boston, where she was also an editorial intern for Candlewick Press. She has participated in and led several mock award discussions and has been a guest blogger on Guessing Geisel since its inception. She has a particular flare for proofreading and editing, and an unfortunate weakness for ice cream and ducks.