For the most part, picture books and beginning reader books have different, though equally important, functions. Picture book reading is generally a shared experience, often between a pre-reading child and an adult – though, of course, picture books can be enjoyed at any age! As such, picture books often have rich, complex vocabulary and syntax, intricate plot structure, and vibrant, eye-catching illustrations that invite the listener to contemplate the details. Often, the illustrations tell the story, or embody sly jokes or secondary plot lines. 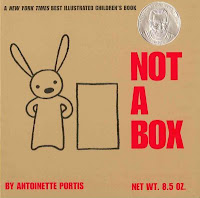 Beginning reader books are for readers who are working towards competence and independence. Though they may often have an adult at their side, it is the child who is reading, and the book is designed to further that purpose. The writing is straightforward, often featuring repetition, especially of new vocabulary. Illustrations are still essential, but they generally reinforce the story, offering important visual clues to help decode the text. And, whereas picture books can play around with font size and placement, in beginning reader books the font tends to be large, plain, and placed on a solid background for ease of reading. Every now and then, however, a picture book arrives on the scene that does double duty: while still serving as an excellent read-aloud, the book also contains some of the features that make it valuable to beginning readers. (These rare unicorns are often excellent storytime choices for large groups as well.) Each Geisel committee is on the lookout for them, you may be sure! And find them, they do: consider Not a Box, First the Egg, I Want My Hat Back, The Watermelon Seed, and many others. And, of course, many great books of this sort are published every year to no accolades whatsoever, but may still be beloved of, and useful to, children who are learning to read. 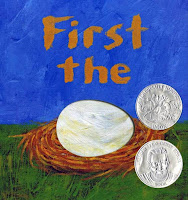 The question is, how do we get these excellent picture books into the hands of beginning readers? In a typical library picture book collection, these books slip into alphabetical anonymity, filling their places among the ranks of traditional picture books, never to be spotted by those readers who need them (for, though your library may have a robust beginning reader collection, one thing I know about children learning to read is that they always need more books).

I’m afraid all of my solutions are basic ones, probably ones that you have already considered and/or implemented. But just in case…

Labeling: As librarians, we love our spine labels (or, at least, some of us do!). If you can’t separate out your picture books for beginning readers, you might consider adding something to your spine labels to designate that these books work well for beginning readers – perhaps just a colored dot or label cover. Of course, you’ll need signage to guide people to those books (and that only works for the ones who can and do read the signs).

Displays: If you can’t make collection-wide changes to how your books are shelved or labeled, perhaps a good display every now and then can help. A mixed display of beginning readers and picture books can be a real winner, especially at the beginning of the school year. If you have display space near your beginning reader books, that’s an ideal spot.

Book lists: Does your library have a rack of book lists for patrons to pick up? A binder full of them behind the desk for staff use? Online lists on your website with links to your catalog? Why not make a list of great picture books for beginning readers to add to those resources? Check out this great example of an online list from the Sacramento Public Library. 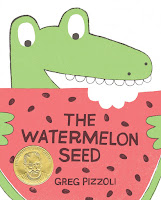 Staff training: This piece actually goes with all of the others – but it can stand alone, as well! If you’re at a library where other staff members may be looking at new picture books, creating displays, compiling book lists, and assisting customers, make sure that they’re aware that there are great books for beginning readers in the picture books, as well as in the beginning reader section. If you’ve adopted new shelving or labeling strategies, make sure that anyone who has a say in the placement of new books knows how to evaluate picture books for elements that make for good beginning readers, and that everyone is confident about helping readers to find their just-right books. And be sure that anyone who contributes to your book lists, whether on paper or online, is keeping an eye out for new titles to keep your list fresh.

Though I’ve offered a few basic ways to promote picture books for beginning readers, I’d be very interested to hear what your library does to address the issue. Have a creative solution I haven’t thought of? Post in the comments below!
Posted by Misti at 11:42 AM

Amy Seto Forrester
is a Children's Librarian at the Denver Public Library, Denver, Colorado. She earned her MLS from Texas Woman’s University. An active ALSC member, Amy is currently serving as co-chair for the Membership Committee. Her ALSC committee work includes serving on the 2016 Geisel Award Committee. She reviews for School Library Journal and Kirkus.
Amanda Foulk is the K-12 Specialist at Sacramento Public Library, Sacramento, California. She had the pleasure of serving as chair of the 2016 Theodor Seuss Geisel Award Committee. She has been an avid lurker (and occasional commenter) on fellow mock award blogs.
Misti Tidman
is the Collection Development Librarian for Youth Materials at the Mansfield/Richland County (Ohio) Public Library. She earned her MSLS at the University of Kentucky. As a member of ALSC, she's had the pleasure of previously serving on the Program Coordinating Committee, as well as the 2016 Geisel Award Committee. She also reviews for School Library Journal, and blogs at kidlitgeek.blogspot.com.
Kahla Gubanich
is the Children's Services Supervisor at the Brunswick Branch of Frederick County (Maryland) Public Library. She earned her MSLIS/MA in Children's Literature from Simmons College in Boston, where she was also an editorial intern for Candlewick Press. She has participated in and led several mock award discussions and has been a guest blogger on Guessing Geisel since its inception. She has a particular flare for proofreading and editing, and an unfortunate weakness for ice cream and ducks.